Montenegrin part of the Skadar Lake was declared a national park in 1983. The seat of the national park: Vranjina, belongs to the Bar municipality but parts are in the municipalities of Podgorica and Cetinje. 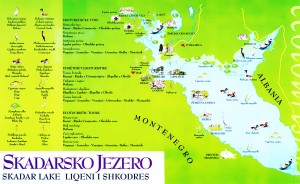 Length lake shore: 168 km; 110.5 km in Montenegro and 57.5 km in Albania. Area around 40,000 ha, 391 km2 of the lake. The Zeta-Skadar valley, surrounded by the mountains of Montenegro, and the distance of about 7 km from the Adriatic Sea. Rumija mountain range, whose highest peak height of 1594 meters, has Dinaric direction and form a natural border between the Adriatic Sea and Skadar Lake. Climate: sub-Mediterranean, with mild and rainy winters (the lowest monthly average water temperature in January is 7.3 ° C). The summers are dry and hot with a maximum air temperature above 40 ° C and the water temperature above 27 ° C. The average air temperature is 14.9 ° C.
Rumi descends steeply to the Adriatic coast, a little more gradually toward the southern part of Lake Skadar. Width of the mountain range is 10 to 15 km. From the Adriatic coast to the Skadar Lake, through a new tunnel Sozina in just 20 minutes away. Two-thirds of the total area of ​​the lake is in Montenegro / 219 km2 /, and the rest in Albania. Depending on the amount of water, the lake surface varies from 530 to 370 km2. Is 44 km long and 14 km wide. The average depth is 6 meters, but in some parts of the bottom below sea level (crypto) and goes down to 60 meters. Skadar Lake is very picturesque and abounds in peninsulas and bay swampy type. 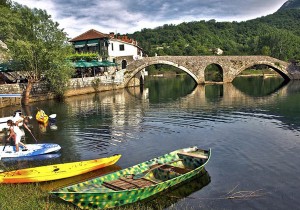 Lowland valleys of the northern part is often flooded. One of the largest lakes in Europe, especially when the water level is high habitat of 40 species of fish. Water it snadijava Moraca, and it stands out from the water to the Adriatic river Bojana. Bojan on the lower half of the flow, makes an international border. The float is 91% of the Skadar Lake, a shallow part of the vegetation makes the rest.

On the banks of Skadar Lake are two small settlements - old urban centers, characteristic picturesque architecture - Virpazar and Rijeka Crnojevića. Both places are recognizable today for its restaurants that offer traditional specialties - in particular the famous carp from Lake Skadar. Southern hinterland of Lake Skadar - Crmnica is famous for the best vine in Montenegro. On the shore of the lake is located a few villages, with simple accommodation. 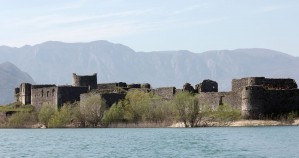 Lake is "hiding" fifteen medieval Orthodox monasteries, spiritual core and witnessed the tumultuous history. Monasteries of Skadar Lake are very interesting and often difficult to access sacred things: Kom, Beska (with two churches, dedicated to St. George and the Virgin Mary), Kosmača, Virgin Virgin of Krajina (founded by Prince Vladimir, perhaps the oldest manastirm in Montenegro), old man Gorica, Moračnik, Vranjina, walnut - 2 km from Virpazar ...
This region is important battles were waged between Montenegrins and Turks, used numerous fortifications, built from the 14th to 19th centuries, including Tophala, Besac, Lesendro, Grmožur, Virska House ... Island Grmozur besides known as Montenegrin Alcatraz because it is the King Nikola built a prison for political opponents, it is also an island of birds. Hidden among the meanders of the part of the lake is beautiful and Crnojevica. Nearby are the remains of the city perimeter where the printing press was located where in 1494 published the first book in this part of Europe Oktoih.

National Park Skadar Lake is one of the largest bird reserves in Europe, with 270 bird species, including some of the last pelicans Europe, with habitats of seagulls and herons attracts birdwatchers. It abounds in fish, particularly carp, bleak and mackerel. There readiness tower and platform intended for bird watching, because they are in the top five ornithological reserves - Manastirska Tapija, Grmožur, Omerova Gorica, Crni Zar and Pancevo Oko.

The park is easily accessible from the direction of Podgorica and Bar by highway Podgorica Petrovac or by train from Bar or Podgorica along the central part via Virpazar. To other areas within the park can be reached by own car or taxi. During the rainy season, Skadar Lake is rich in water blue color, and in the summer becomes a silver and glittering under the sun's rays. Panorama Skadar Lake is one of the most beautiful course in Montenegro, you can admire looking at landscapes from Pavlova Strana and Odrinska Gora, Rijeka Crnojevica or Beach Pjesacac ...