Skadar Lake is beautiful combination of flora, fauna, architecture, gastronomy and traditions. Visitors from the rest of the world under the Mediterranean sun on freshwater beaches, with healthy foods and famous wines. This is an opportunity for water sports, hunting and fishing, photo safari, visiting monasteries, islands, fishing villages. 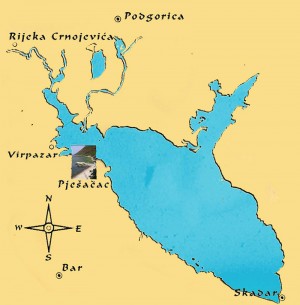 Skadar Lake separates Montenegro from Albania. The largest lake in the Balkan. Shorter known as Scutari and this is the name of the Albanian town on its shores, the Albanian Shkodra (Albanian: Shkodra or Shkodër, Montenegro: Skadar, Italian: Scutari). The origin of the name is from the Greek word Skoutari. Surface is 6 m above sea level, can vary from 370 square kilometers to 530 square kilometers, of which 2/3 in Montenegro. The lake is kryptodepresion, filled by the Moraca river and flows into the Adriatic Sea, 41 km long along the Bojana river, which is border too.

Montenegrin part of the lake and the coast were declared as a national park in 1983. It's one of the largest bird reserves in Europe, there are about 270 species, including the last pelicans in Europe. Scholars and fans watching the habitat of seagulls and herons and full of fish. Especially carp, unique endemic species bleak and eel. With Ramsar Convention lake Skadar has been included in the list of international importance in 1996.